“Synastry is the batter, The Composite chart is the cake”

A combination method of the birthcharts of two people, layered over eachother (the signs must be in same place).
This shows how the people interact and relate with eachother. However,
it’s recommended to do an individual birthchart analysis before analyzing the Synastry
to see the personal needs and potential.

1) Planetary house overlays (1, 5, 7, 8, 9 = most important)
2) Planetary aspects
3) Angles in the houses & aspects
4) Conjunctions to the Axis/Angles = very strong bond
5) Important : Moon, Venus, Jupiter, Pluto, Saturn, NorthNode, Juno
6) Conjunct-aspects and how many (=can cause disharmony)
7) Aspects from Saturn/Jupiter to the rulers of the other persons houses
8) How do the rulers of the houses interact with the other person’s rulers

Meaning of the houses & importance

Lilith in Synastry :
You can find more info here

Love Asteroids in Synastry :
After analyzing a synastry, it can be useful or fun to use some asteroids to see what’s hidden or what is highlighted.
You can find a list of the love Asteroids here
If you’re lucky, there are Asteroids that have your name & your lover’s, This is a more fun technique to use : Name Asteroids

• No/little contact of personal planets = You don’t really feel eachother.
• Houses where planets fall into = The expectations the house person has
• Trine = Most positive aspect in Synastry
• Sextile = Harmonious and exciting
• Square = Creates a challenge & actions (squares are needed actually)
• Opposition  = Creates attraction and can cause destabilisation
• Square aspects from Saturn = Challenges the area of the aspected planet
• Harmonic Jupiter aspects = Enhances, expands, brings luck & happiness
• ASC in 6th or 12th house = Could be difficult 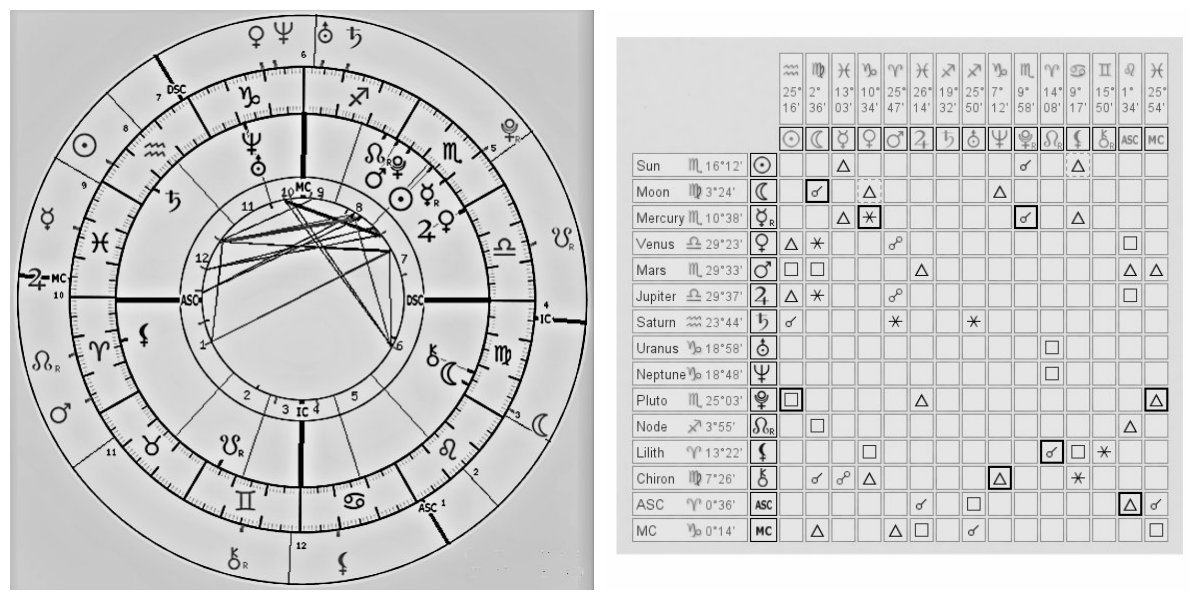 A good synastry in my opinion:

It depends on the individuals. Therefore an individual birthchart analysis is necessary to see what a person needs, how they tend to react and deal with things aswell as what they lack in the birthchart in which a partner can fulfill the empty spot/energy.
The most important thing in my opinion is having harmonious Moon aspects, especially Moon-Moon. No matter how hard the relationship may be, this will act as a basis of being able to understand eachother’s emotions. When Moons make a hard aspect to eachother, it may cause discomfort, awkward feelings and misunderstanding between two people especially with Moon square Moon. This is a no go in love synastry. Moon opposite Moon is very challenging in a love relationship, which may act as strong attraction at first, but will result in emotional incompatibility.
Aspects from Venus are important to understand the type of love that’s shared and especially in which house she falls will show where it expressed itself.
Venus should make harmonious aspects to Mercury, Jupiter, Sun, Uranus and Saturn.
Mars in hard aspect can only be positive if it’s an opposition to Venus since this acts as strong sexual attraction. Hard aspects from Mars (square) to the ASC are a no go (depending on the birthchart of the Mars person) this may result in aggression, fights and quarrels. However Mars is where you energize eachother and shows the area of action between you both. Positive aspects will act as a force within eachother’s life, the way you stimulate eachother such as Mars in harmonious aspect to Saturn will show stamina and great teamwork.
Stelliums that fall in the 4th, 5th or 7th house are very positive since they will act as a pleasant feeling to be around eachother, to share life together.
Stelliums in 6th, 10th or 12th are considered difficult or less romantic.
Especially the 12th house can be very tricky and is deeply dependent on the individuals their birthchart. The person who has their stellium fall into the 12th house is the person that most likely unconsciously seeks healing with the house person, so this can show a strong karmic connection, however it’s the karma that makes it tricky when it comes to this type of stellium being positive or negative. It holds both the soulmate or the enemy.
Positive Saturn aspects to the personal planets of the other person act as relationship glue, and are needed if you’re looking for longterm commitment. If there are a lot of hard Saturn aspects, the relationship will become heavy and unpleasant overtime.
It’s important to consider the conjunction of Southnode (if there are any) to both planet or angle. It shows where you come from ; your pastlife together, but it also shows the possibility of the energy of the planet that’s conjunct to fade or weaken over time, such as Southnode conjunct Mercury, will show you’ve been siblings or neighbors in a pastlife, but this will result in less fun activities and communication the longer the relationship lasts. Same applies to Southnode conjunct Venus, it will ignite strong attraction at first, a feeling of knowing this person and a natural flow of love, however the love will fade overtime especially if the Venus doesn’t receive any other good aspects or when she isn’t nicely placed within the other person’s chart (such as Venus falling into 6th, 10th or 12th house)

But ofcourse, a perfect Synastry is impossible, keep that in mind. NO relationship will be smooth without any friction or challenges, that’s completely unrealistic. However having these listed aspect in your Synastry will help.