Forget about ’“but cancer matches best with pisces”
Your soulmate or your ideal match has NOTHING to do with sunsign compatibility.
It is more so about your Sun-Moon, Moon-Moon, Venus-Moon aspects, than anything else. Well yes, ofcourse those deep pluto aspects, and saturn aspects that act as relationship glue matter a lot too.
The best matches can bloom between people who are total opposite by sunsign or would be considered ‘worst match’ according to your local gossip magazine.

Soulmates/twinflames don’t always last, don’t expect a fairytale, sorry to break your illusion, but this is reality. UNLESS, two very strong individuals are behind the union, open to transformation and to undergo spiritual growth, than unconditional love can come in to help you both go through times of hardship.

Having 1 soulmate aspect in synastry doesn’t necessary mean that you’ll feel it, as these can also happen between two people that can’t stand each other. I would personally look for multiple indications to feel sure about a special soul connection.

A twinflame union is very intense, it is literally two people mirroring eachother, but completing eachother. complementing the bright sides, aswell as the downsides. Most of the time soulmate/twinflame relationships are very fated and meant to come into your life to learn lessons that are key in becoming the higher self, the divine feminine or masculine.

Compagnion soulmates
A certain pattern is seen within the people you connect with on a deep level,
all sharing similar life stories and experiences and mostly those small group of close friends all have the same Sun / Rising / Moon sign OR in the same element.
They are in your life to help you grow and nurture along the way.

Connections to the Axis in synastry
The strongest indication of past life connection and a soulmate bond, especially when a planet or point in conjunct.

Aspects commonly found in the Synastry of Soulmates

Soulmates by Moon conjunctions in a tight orb of 3

I have written about Twinflames on this website, please check the description there, to see if you have had some of those experiences.
This union is intense and CAN  be seen through astrology, although it’s very hard to find the exact ‘twinflame aspect’  since it is unique to every union. What pops out most of the time is having Venus/Mars in the same sign/element or in the opposite. Having the ASC falling into the same sign/element or opposite. I have listed the most commonly and important aspects below.
!!! By element i mean complementary : Earth blends with water and fire blends with air.

1) Planets/points :
In the same sign or element.
Such as having Venus in Libra for both  // Venus in Virgo and Venus in Capricorn.
The Moons should be in harmonious aspect such as a trine, sextile but most powerfully is the conjunction.
Squares show a karmic connection.

2) Ascendant :
Same element / sign
Such as having both a fiery ASC

4) Transformative :
Pluto contacts or conjunctions, intense house overlays.
The Union is Plutonic, so having strong contacts with Pluto is commonly seen. Such as a conjunction with a personal planet, or falling into a sensitive house, for example: 8th or 12th house.

6) Amatekaraka :
= Forceplanet
Planet with the second highest degree (NOT: NN, SN, PL, NE, UR)
Having it in the same or opposite sign, house or element

7) Darakaraka :
= Spouseplanet
Planet that represents the spouse : lowest degree (NOT: NN, SN, PL, NE, UR)
Having it in the same sign, house or element
It can also be the same planet

8) Northnode :
In the same sign/element
The northnode signifies your purpose and goal in life. It is seen that both have their northnode is the same element.

11) Pastlife :
• Angle conjunctions
• Saturn aspects
• Southnode conjunctions
Pastlife connections are very common within this union. Because of this feeling of familiarity between the two, it’s rooted back to a past life together, and coming back to continue their journey of love and growth.

12) Double whammy’s :
Such as having Moon sextile Venus // Moon trine Venus
Double whammy’s are double aspects, so to say. It creates a balanced and harmonious feel between the two. Having the same feelings towards each other, depending on what planets make these aspects.

The asteroids i prefer to use to help explain the deep connection shared, especially between twinflames. 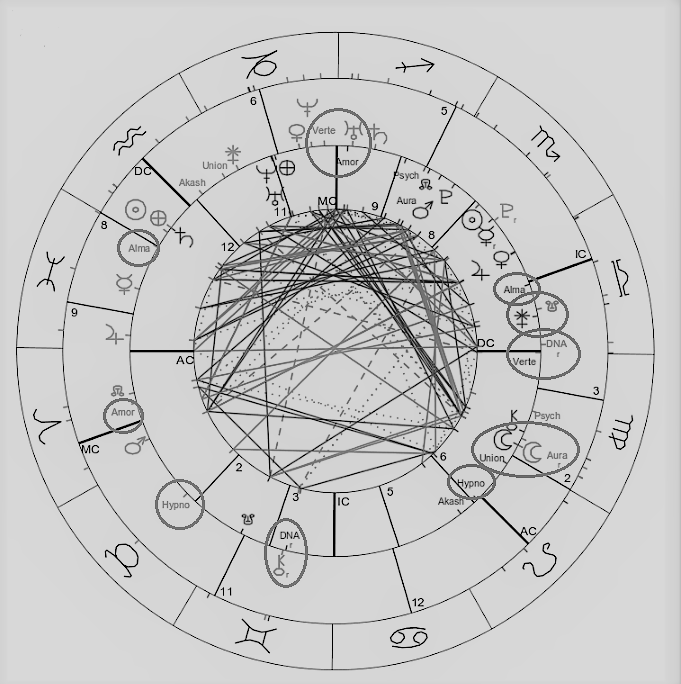 • Person A = innercircle
• Person B = outercircle

• Person B’s Chiron conjunct to person A DNA = Chiron is also the arrow that points towards the soulmate or a strong soul connection. This combination shows the intense familiarity between the two individuals.

• Person B’s Hypnos in Person A 1st house and conjunct the 2nd house cusp creates a direct linkage of a telepathic bond which is strongly felt by the 1st house person.

• Person A’s Hypnos conjunct to Person B ASC gives a very strong telepathic bond which is immediately felt by the two individuals.

• Person A’s Psyche trine to Eros(not activated in this image) of peron B. (Psyche-Eros is a pair in mythology)

• Person B’s Aura conjunct to Person A Moon is a very clear sing that the two feel completed in eachother’s presence.

• Person B’s DNA conjunct to Person A DSC is a strong indication that they remember eachother as loved ones from the past.

• Person B’s DNA conjunct Person A Vertex is a strong indication of fate that these two individuals meet again.

• Person A’s Alma conjunct Person B IC . IC is also seen as a past life Angle and the deepest part of one’s soul, Alma also means Soul. Having a conjunction of Alma to IC is an indication of two soul who reunite into one, who recognize eachother immediately. A true soul union.

• Person A’s Amor conjunct Person B Uranus, Uranus is the ruler of person B’s 7th house, meaning there is an unbreakable bond of unconditional love between these two individuals.

• Person B’s Vertex conjunct Person A MC is an indication of a fated meeting, connection.

• Person B’s Alma falling into Person A 12th house. 12th house is linked to the soulmate and past lives. Having one’s ‘Soul’ (alma) falling in this house has the same meaning as having Alma conjunct the IC. Meeting of souls, soul union and recognition.

• Both individuals have Hypnos on 14 degrees, creating a square aspect, which strengthens the telepathic bond they share.
• Person A’s Hypnos is trine to Person B Amor (1 degree orb), which indicates a strong soulish union.