The main signifactors of marriage are Venus & Jupiter. Getting a clear image of your marriage potential depends on various factors :

This way you can figure out whether you will marry early or late in life. Everyone can marry and in the end it all depends on the two individuals their Synastry & Composite chart + timing via Progressions and transits for most accurate prediction.
To know characteristics, personality & meeting with spouse : click here.
Don’t worry if you have an empty 7th house, just look at the ruler of your 7th house and find where it’s placed, see what aspect it makes to Venus & Jupiter.

The D9 Chart
This chart is known for showing the actual marital life if an individual. This chart also shows more information regards the destined spouse in this life. More information on the D9 chart : click here

The sign in which the DSC falls into, describes your attitude and approach towards intimate relationships and marriages. The element of the sign shows what type of partner you feel attracted to. Often the sign/element on the DSC indicates relationships with people who have this sign or element prominent in their own chart such as DSC Libra ; getting into relationships with Air signs.

Planets in the 7th house

These are basic indications in a birthchart with possibility of multiple marriages.
Ofcourse it depends on way more than just having a heavy populated 7th house for example.

The houses describe the different marriages

It is said that each “love affair” or Marriage after the first marriage is counted 5 houses further. So 7th is first marriage , 5 houses forward from that is the 11th house, so this house represents the second marriage. And so on..
If you happen to have been married once than you have to look at your 11th house for understanding the 2nd marriage. However the ruler of your 7th will still play major role in the prediction of 2nd or 3rd marriage.

This is a method in which you count the number of major aspects the Sun (female chart) or Moon (male chart) make before leaving the sign it’s in. Example :
if a woman her Sun is at 16 degrees Scorpio , while Mars is at 20 degree Aquarius and Uranus at 23 degrees Pisces, than her Sun will make a square to Mars and a trine to Uranus before the Sun leaves the sign of Scorpio. In this case it shows 2 potential marriages, but it doesn’t mean the woman has to marry twice. Keep in mind that Astrology shows potentials and opportunities. It could also show 1 longterm committed relationship & 1 marriage.

The degrees matter too

• Venus and mercury must be in direct motion
• Plan the marriage under a new moon
• Sun conjunct (new) Moon = new beginnings
• Have the Moon fall into your sign or in the sign of your partner
• Moon falling into your or your partners 7th house or in Libra
• Have Sun trine / sextile Moon
• Look for trines / sextiles with Moon, Venus and Jupiter

Marriage in the Solar Return chart

Marriage can be seen in the 2nd, 3rd, 7th, 9th and 11th house of the Solar return, however it’s not always clearly indicated in the solar return chart especially when it occurs in difficult situations such as a secret marriage. The most reliable method for marriage predictions are the progressions in combination with transits.

This chart is an example of a Solar Return possibly indicating a year in which marriage could take place, however the Progressions are more accurate since the Solar return could also indicate a meeting with the future spouse. 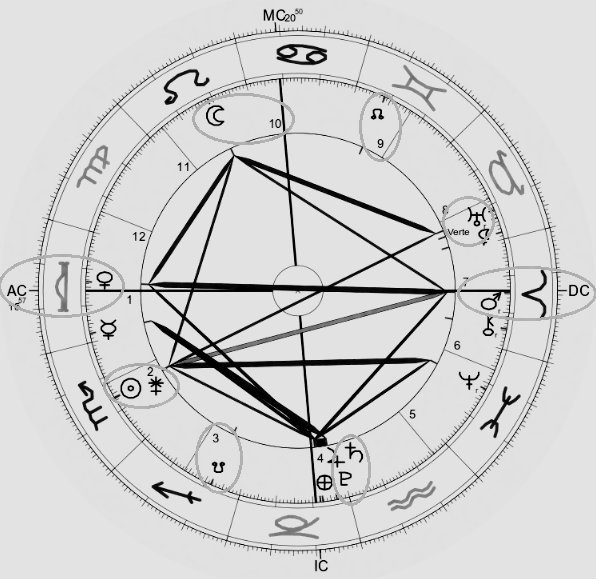 PS: i took this solar return chart as an example some years ago when writing this page. Turns out that this was the Solar return for the year when i met my spouse 😉