An eating disorder or self-esteem issue can occur throughout the whole zodiac.
However, there are a few aspects that caught my eye. I’ll cover the most common issues to be found in such natal charts.

There are many different causes for a native to develop an eating disorder, so there is no clear-cut indication for this.
Often the struggle has several triggers and therefore more than one root that has to be understood. In the end it’s a complex concept, however astrology can help to understand where the disordered thinking may come from.

2nd house = Self-esteem
First thing to analyze is the 2nd house, because it’s the house of self-esteem, how we go about food and what we think we’re worth (food, nice belongings, sensuality,…) The sign on the house cusp indicates how we approach food and what we think about ourselves. Aries on the 2nd cusp may indicate a person that swallows their food before they chew it, Taurus may become possessive of their food and may hide it (very typical for bulimia folks) Scorpio on the 2nd cusp may indicate some sort of trauma related to ‘how to love myself’ or an obsession with food and so on.
The strength of the 2nd house needs to be checked for challenging energies :
• 2nd ruler in 8th or 12th house
• 2nd ruler in hard aspect by Saturn, Pluto, Mars, Lunar node
• Saturn, Pluto, Mars, Chiron in the 2nd house
• Chiron in the 2nd house or in hard aspect to 2nd ruler

6th house = Habits
The 6th house is the house of health, how we deal with it on a daily basis, it shows our habits and routines, so it also indicates how we go about having habits and if these habits are positive or negative. Here too, the sign on the house cusp needs to be considered as it shows our approach and tendencies towards daily habits. If Virgo is on the 6th cusp it may make a person way to focused on details or become obsessed with clean eating. Tho any sign can be on the 6th cusp, it’s about how challenged the house and it’s ruler is that may bring out the most negative qualities of this sign. All signs have a positive and negative side, so stay openminded.
• Chiron in 6th house
• 6th house cusp on 29 degrees
• Saturn, Pluto, Mars, Lunar node in 6th house
• 6th house in Scorpio, Pisces, Cancer,…
• Intercepted sign in the 6th house

Intercepted signs
Especially interceptions have a strong influence when they occur in the 6th-12th axis, it means to have a blind spot when it comes to health matters. Often it’s an indication of a psychological reaction towards something that was absent during the upbringing and childhood, something we did not learn the right way or didn’t learn at all.
Such an example would be a native with Virgo intercepted in the 6th house, Pisces in the 12th house.
Something about detail, self-care, escapism, seeing the full picture,… is distorted. A person may be overly focused onto their own body or having body dysmorphia.

8th house = Trauma & obsessions
Often traumatic experiences are at the root of someone developing an eating disorder, such as sexual assault, that may lead to sexual shame or overall shame towards own body. Again the concept is very complex and very personal, but this cannot be ruled out. Aside from trauma, the 8th house also shows the obsession we have. Let’s say someone has their ascendant ruler in the 8th house, it means the person could be overly obsessed of their own appearance, and since the 8th house represents transformation, it could mean that one wants to ‘transform’ (destroy) their physical self into something else, such as an ideal.
• ASC ruler in 8th house
• Saturn, Pluto, Mars, Lunar node, stellium in 8th house
• 6th or 12th ruler in 8th house

12th house = Escapism & addictions
Here we can find our subconscious, the things buried deep within and how we tend to escape the real world.
If there is an amplified 12th house, it may cause a person to face a lot of confusion throughout life because it takes alot of self-awareness inorder to deal properly with an intensified 12th house. It may result in unhealthy and destructive addictions, such as drug abuse, alcoholism and eating disorders. If one has a stellium in the 12th house it can make a person feel very misunderstood or they may not understand themselves. The 12th house is also about idealizations one may have or the illusions that are set about something.
• Stellium in 12th house
• Saturn, Pluto, Mars, Lunar node in 12th house
• Hard aspects to the 12th ruler
• Chiron in 12th house

Mars-Saturn: These planets are associated with Will and the Throat Chakra. When the patterns of stuffing one’s feelings is prolonged, this chakra and the thyroid gland will be affected. This often leads to a health problem called Wilson’s Syndrome. Initially, through the stress of repression and anxiety, the adrenals are taxed. Later, this adrenal stress pulls on the thyroid gland. The body temperature drops, often to around 97°. Fatigue and exhaustion further prevent the individual from ever asserting self for one’s self. In talking to people with an under-active thyroid, they frequently complain that they do not feel alive.

Physically, this can be addressed through adrenal supplementation, thyroid support and even taking organic, cold pressed coconut oil that quickly raises the body temperature and energy level. However, the psychological patterns that contribute to obesity are more difficult to change.

Mars-Neptune: This is the aspect that tells me that there was a parent who did not want the child to grow up or grow away. Later, these individuals sabotage their own efforts by talking themselves out of doing, especially doing something for themselves. These people often feel that they never scored a victory in expressing their anger, their Mars. Often, when they feel anger, they become quit tired and even depressed. This aspect is actually best suited for fighting for an ideal, something greater than themselves, but not directly for themselves.

Mars-Pluto: With the compulsive over-eater, this combination can indicate abuse. The rage and resentment are suppressed through eating. They often fear the rage within. They fear that they could kill someone— so they eat instead, killing themselves with the health issues that arise through obesity.

Example chart
This person has struggled with boulimia and annorexia. Take note of the 12th house (mental health).
Saturn may cause the person to have subconscious fears, Saturn is also the traditional ruler of the Ascendant, placed in the 12th, so it may indicate that the person isn’t seeing themselves clearly or in any realistic way.
Chiron in the 6th house is an indication of wounded habits, a certain shame towards own body, it’s amplified with the conjunction of Jupiter, making the wound bigger than usual. tho this conjunction has huge potential for becoming a healer but it first the own wounding needs to be healed. 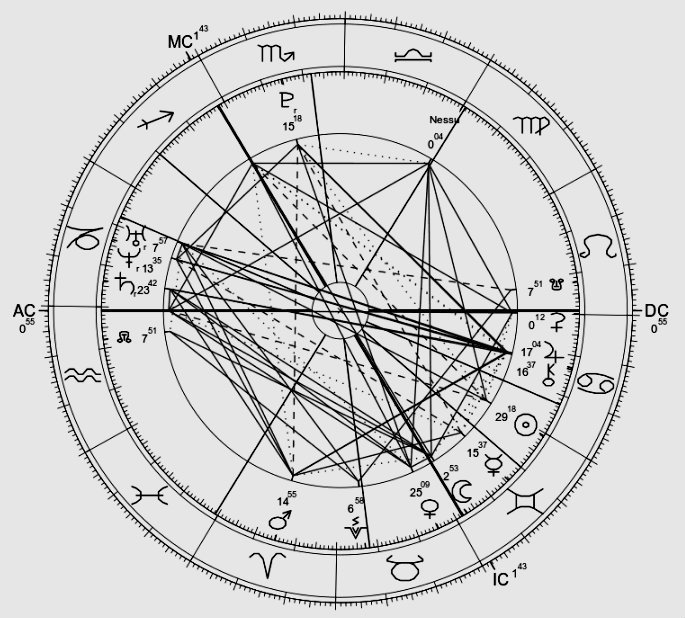 Various sources, such as : https://www.lynnkoiner.com/astrology-articles + own experiences and observations